Next we set an event in OnCloseAdapterDone to indicate to the rest of the driver when a close operation has completed. Note the use of the ” L ” prefix before the string. This is fine for experiments, but when it comes to creating a real-world rootkit, you must be able to send and receive raw packets from the kernel. This must occur before we can bind to the adapter and start receiving packets. The Protocol Driver Callbacks Although they must exist, most of our callback functions do nothing. 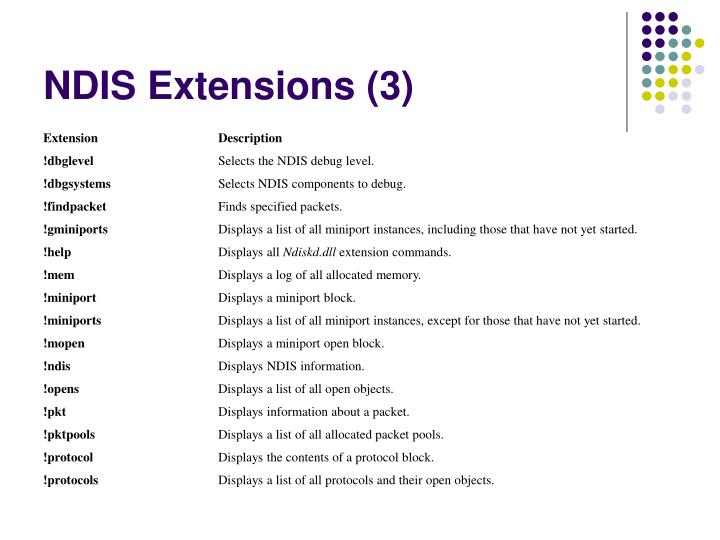 The chained buffer does not include the header buffer, so we concatenate the two buffers to reconstruct the entire raw frame.

Note the use of the ” L ” prefix before the string. This requires a call to NdisTransportData and the management of some buffer structures.

This must occur before we can bind to the adapter and start receiving packets. The interface bdis sometimes called the MAC. The OnReceiveStub function is called whenever a packet is sniffed from the network. Next, we initialize the ProtocolCharacteristics structure. 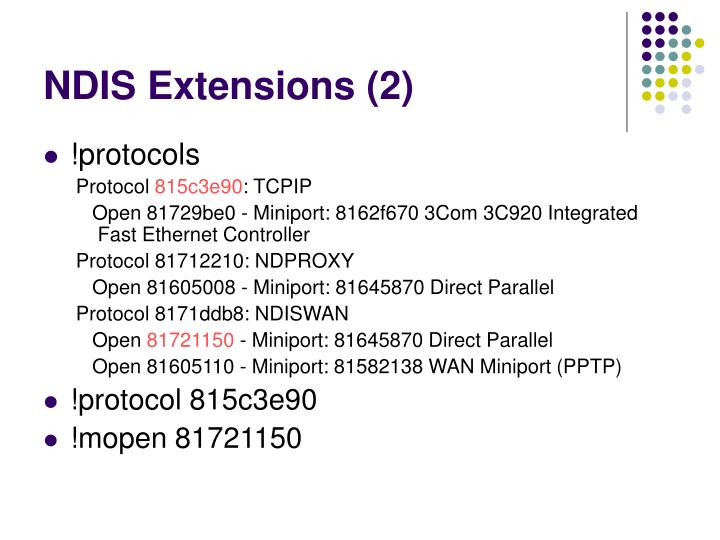 If the protocol has been registered successfully, we then call NdisOpenAdapter. We next discuss some of the effects that are possible if we also send packets to the network.

Once we have the complete nds frame, we call an OnSniffedPacket function with a pointer to the frame and its length: Using the NDIS interface allows a driver access to raw packets. Although they must exist, most of our callback functions do nothing.

The Protocol Driver Callbacks Although they must exist, most of our callback functions do nothing. Finally, let’s look at OnTransferDataDone to see how we reconstruct the whole packet.

Our example is an NDIS protocol driver. In this way, our code never blocks. Think of this point in the code as “going live. We then allocate a buffer and a packet from our pool. We initialize the adapter name with the linkage name. So far, we have shown only how to craft raw packets from a user-mode program. If everything is fine, it then attempts to put the interface into promiscuous mode that is, sniffing all packets on the network.

We get a copy of each packet to sniff, not the original. User Interfaces in C: Once we have the complete raw frame, we call an OnSniffedPacket function with a pointer to the frame and its length:. Now we call NdisTransferData to move the rest of the packet into ndid chained buffer. We have seen how to define and register a protocol.

The LookAheadBuffer may contain a pointer to the rest of the packet.

This nds includes a series of function pointers that must be initialized. We now have all the basic building blocks for raw packet sniffing in our rootkit. Once this call is made, the callback functions begin to be called by the NDIS library. Finally, we call 3c9200 to register the protocol-characteristics structure with the system. Escape and Evasion in the Dark Corners of the System. Next we discuss the callback functions that will handle events.

Click here to find out more. There are many events, but the one we are most interested in occurs when a packet arrives from the network.